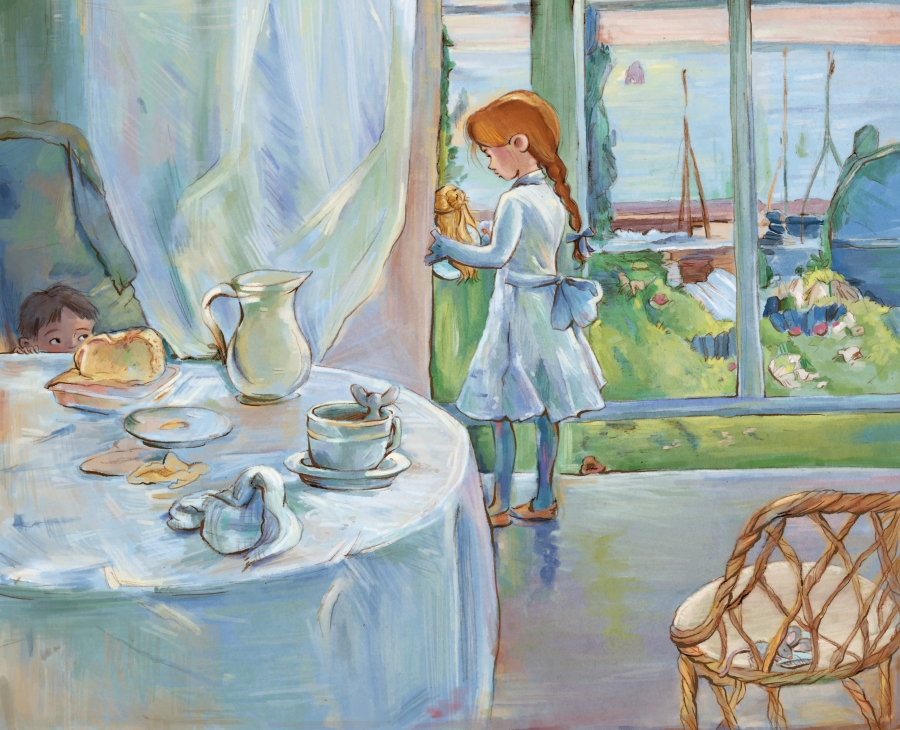 Added in an extra storyline, increased the saturation, made the objects a little clearer, gave the girl long sleeves, and added in some linework.

Who is this girl? What is she thinking and feeling? And what happened in this room 30 minutes earlier? There was obviously a get-together—perhaps a party or someone had come to tea. Was this get-together with family, adults, or younger friends? My initial reading was that this girl is sad, but she could just be playing on her own—or playing hide and seek with somebody? (If her friend looks familiar, I opted to use my version of Monet’s son—which could have happened, since Morisot and Monet were friends.) I tried to find more information about this painting, but sadly couldn’t find anything.

It wasn’t until I painted this that I noticed our friend is holding a doll. I’m still not sure about everything on the table. I see Morisot’s pitcher and the teacup but had to guess at the other objects. And what an amazing room! To have those huge windows overlooking the ocean?!

What I noticed or learned from Morisot’s techniques:

I’m not entirely certain what medium Morisot used for this painting, but I have learned that she experimented with a variety of mediums. During this time she used color pencils, which may be what she used to create those grungy lines in her original. But it also looks like she used pastels or oils here, and maybe even watercolor (like on the left chair)? At this time Morisot also worked to clarify form. I see some of that in the girl, but I see a lot more impressionist markings in the rest of the scene.

I really enjoy Morisot’s grunge-look technique and the way she scatters color. You’d think it would be faster to not be so precise, but it took a long time for me to achieve that messier look. I think I’d like to add in a touch more of this grunginess to my own work.

With the exception of adding in lines and some character stylization, I kept this pretty close to the original. (That original is so good—definitely one of my all-time favorites!) I also increased a tiny bit of color saturation.

This masterpiece is so magical! It takes me back to cool summer nights and magical twilight moments. I wish this was my garden flooded with flowers and glowing lights. How often did these sisters (Polly and Dolly) come out to enjoy Chinese lanterns? Did they light them often? Is this just for family pleasure, or are they getting ready for a party? What do Polly and Dolly usually do together? What do they talk about?

What I noticed or learned from Sargent’s techniques:

What isn’t there to love about this piece? I love Sargent’s graceful lines, his subject matter, the colors, the poses, the lighting. To achieve that lighting, he set up his subjects and props so he could paint 2-3 minutes daily under ideal lighting for more than a year. (Talk about dedication!) Although I don’t strive for realism, Sargent’s artistic sensibilities are in the vicinity of where I aim.

By the way, I didn’t expect to take so long perfecting the flowers. I guess that since I’ve drawn so many children it’s easier for me to draw them than inanimate objects. But—once again—this exercise reminds me that giving the background and supporting objects enough attention adds to the illustration as a whole.

I substituted a lot of children for the adults, simplified a few background elements, amped up some colors, and made facial features more apparent. I also changed the storyline on a few people. And if some of these characters look familiar, that’s because you have seen them before!

This painting is the ultimate people-watching exploration. Each person and group has their own personality. Can you find the older couple, spot a musician (playing a hunting horn), and count how many people are on the water? Who else do you see? Which group would you join?

This MousterWork really challenged me, so I’m glad I had most of the week to work on it. The original is about 7’x10’, making reproductions difficult to capture all the detail. And when you add Seurat’s pointillism to the mix, it makes some of the details harder to see. Of course, this gave me a lot of room to interpret in my own way. It was also interesting to figure out my own kind of pointillism. I don’t think I would have had enough time to make all the small points of color like in the original. No wonder it took him two years to finish!

What I noticed or learned from Seurat’s techniques:

While mapping this MousterWork out, I admired how Seurat worked out his composition with precision. He used negative space thoughtfully, carefully choosing where to overlap to create depth. And of course his pointillism is so unique. My research shows that he used this technique with the purpose of helping the colors be especially vibrant. As I incorporated some of this into my rendition, I did notice that the rubbing colors really do create a vibrance that’s hard to replicate otherwise.

Seurat’s use of shapes is strong, as is his value structure. Although I opted to include more visible facial features in my interpretation, I recognize the value in leaving them vague so that the viewer has a chance to interpret each character’s experience in their own way. All told, my favorite aspects of this piece are all the surprises and storytelling. 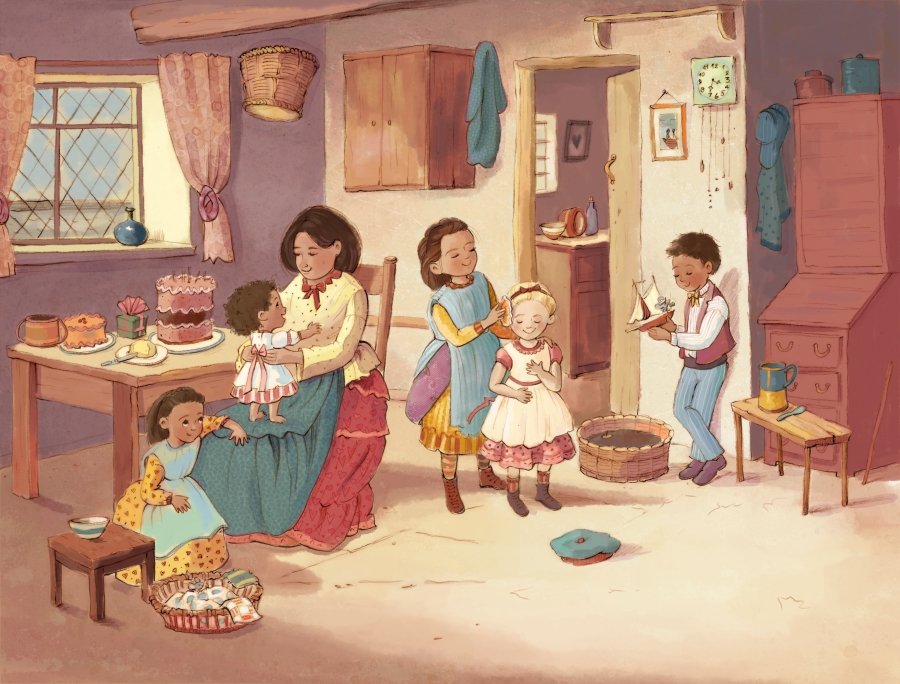 I started out using most of the same colors from the original, but it just felt meh. So I played around with different colors and lightened the room as a whole. I also added a birthday cake. Whose birthday do you think it is?

Most families today have two or three children, so I love seeing all five here (though I made one of them perhaps a friend) and considering the things they are interested in. They look like they enjoy each other and that there’s a lot of laughter. I love that there’s a bit of clutter to help it feel lived in and to give us an idea about what they liked. Did they spend a lot of time in this room? Did they venture outside often? If they lived by the sea, I hope they did! Was their dad a sailor? Did they see him often, or was he away most of the time?

There are a few objects I’m not exactly sure about, like what is in the baskets on the floor? I think the left basket has shells (based on the nautical elements scattered throughout). And is the basket on the right a garden?

What I noticed or learned from Turner’s techniques:

I hadn’t seen this painting or heard of Edward Turner until researching potential MousterWorks. What drew me to it is its peek into what life was like for a family of lesser means—at least one not in nobility. Turner makes me want to know more about this family. Unfortunately, I couldn’t find any information about him or this painting. Although I ultimately decided to make it lighter, I do appreciate the mood he creates with the lighting. 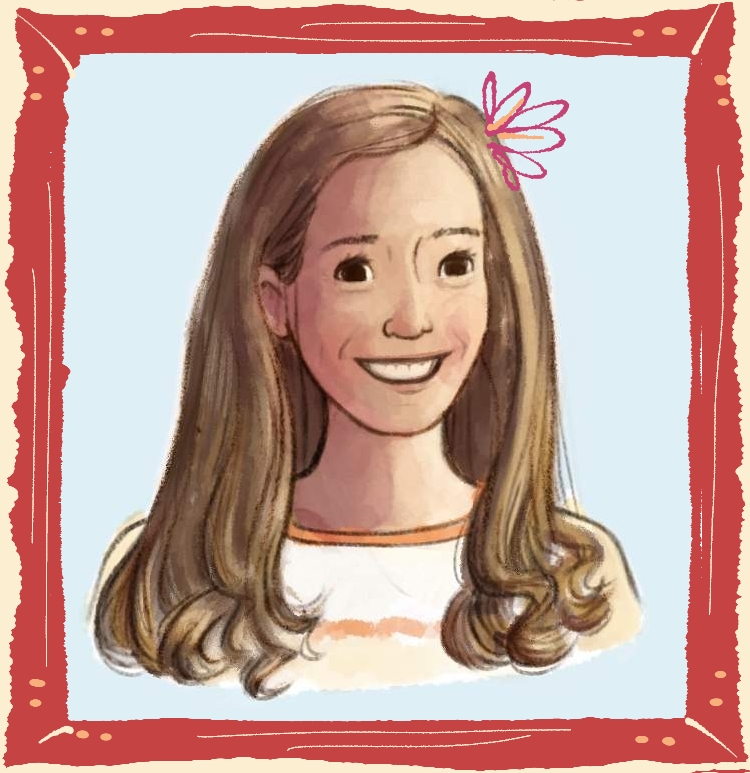 My name is Angela, and I love how Masterpieces make me think about people painted in time. Hopefully MousterWorks will get you thinking too! 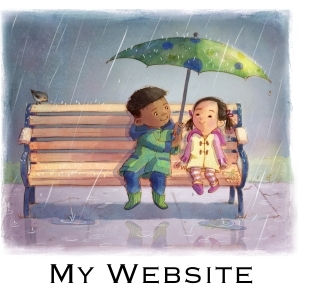 Love a MousterWork print? They will be available in my Etsy shop. Don’t see the one you want? Email me and I’ll add it in.